The Luther Seal: Summary of the Gospel

The most enduring symbol of the Lutheran Reformation is the seal that Luther himself designed to represent his theology. By the early 1520s, this seal begins to appear on the title page of Luther’s works.

Here is how Luther himself explained its meaning:

First, there is a black cross in a heart that remains its natural color. This is to remind me that it is faith in the Crucified One that saves us. Anyone who believes from the heart will be justified (Romans 10:10). It is a black cross, which mortifies and causes pain, but it leaves the heart its natural color. It doesn’t destroy nature, that is to say, it does not kill us but keeps us alive, for the just shall live by faith in the Crucified One (Romans 1:17). The heart should stand in the middle of a white rose. This is to show that faith gives joy, comfort, and peace—it puts the believer into a white, joyous rose. Faith does not give peace and joy like the world gives (John 14:27). This is why the rose must be white, not red. White is the color of the spirits and angels (cf. Matthew 28:3; John 20:12). This rose should stand in a sky-blue field, symbolizing that a joyful spirit and faith is a beginning of heavenly, future joy, which begins now, but is grasped in hope, not yet fully revealed. Around the field of blue is a golden ring to symbolize that blessedness in heaven lasts forever and has no end. Heavenly blessedness is exquisite, beyond all joy and better than any possessions, just as gold is the most valuable and precious metal.  (From: Letter from Martin Luther to Lazarus Spengler, July 8, 1530 [WA Br 5:445]; tr. P. T. McCain)

Following are various versions of the seal as it has appeared over time since the Reformation.

The first version was used in Luther’s writings in the 1520s for the first time, and was in black and white, with Luther’s initials. 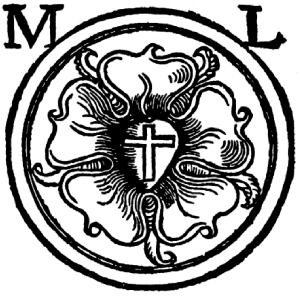 A colorized rendition of the seal began appearing as printers began to include color images in Luther’s works. Each one was laboriously painted by hand. 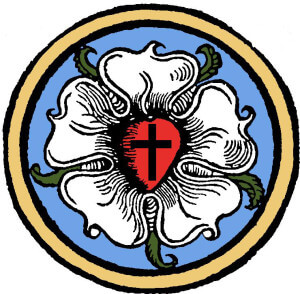 This article is a reprint from LutheranReformation.org.  Please visit thier page to find more information on the Celebration of the 500th Anniversary of the Reformation.