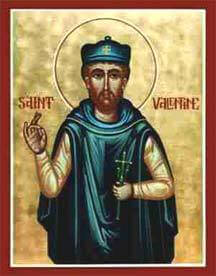 The article "The Feast of St. Valentine, martyr", was written by the Rev. William Cwirla and originally appeared on his blog as well as the Higher Things Dare to Be Lutheran website.

My wife and I have an agreement since our courtship days.  No Valentine’s Day!  No store-bought chocolates, no overpriced flowers, no syrupy-sweet cards, and definitely no jewelry.  This was her idea, by the way, and I was more than willing to go along with the program.  It’s one of the reasons I married her.

Valentine’s Day appears to be one of those baptized paganisms.  Plutarch (that’s Mestrius Plutarchus who lived between 46 and 127 AD - for all you kids in public school) described the Roman festival of Lupercalia, which fell on Feb. 15th this way:

“Lupercalia, of which many write that it was anciently celebrated by shepherds, and has also some connection with the Arcadian Lycaea. At this time many of the noble youths and of the magistrates run up and down through the city naked, for sport and laughter striking those they meet with shaggy thongs. And many women of rank also purposely get in their way, and like children at school present their hands to be struck, believing that the pregnant will thus be helped in delivery, and the barren to pregnancy.”

It was the “running of the bulls” meets the college streakers of the 70’s.  I’m a bit concerned about the “shaggy thongs,” but I digress unnecessarily.  You get the point.  Lupercalia was a pagan fertility festival. According to one source, on Lupercalia a young man would draw the name of a young woman in a lottery and would then keep her as a sexual companion for the year.  (And you thought Mardi Gras was bad.)  Pope Gelasius I (492-496 AD - that’s how long he was pope, not how long he lived) dumped a bucket of ecclesiastical ice water on Lupercalia for obvious reasons and declared February 14th to be the feast of St. Valentine.

So who was Valentine?  Well, you actually have three guys to choose from.  According to the New Advent Encyclopedia, my on-line source for all things Roman Catholic, there are at least three different St. Valentines in the martyrologies.  One was a priest at Rome, another the bishop of Interamna (modern Terni, in case you haven’t made summer vacation plans yet), and the third some guy in Africa that no one knows much about.  As the story goes, Valentine got in trouble with Emperor Claudius II, allegedly over Claudius’ prohibition of marriage for young men because he needed more soldiers.  (It appears that emperors, like their modern day counterparts, can never get enough troop strength.)  Valentine got tossed into prison, where, legend has it, he fell in love with the jailor’s daughter and wrote her a little love note on the way to his execution.  And the rest, as they say, is history.  Sort of.

The Roman Catholic Church bumped St. Valentine out of the canonical hall of fame back in 1969, but the Lutheran Service Book managed to squeeze him in on its list of Commemorations.  (I’m not kidding; it’s on page xii.)  Geoffrey Chaucer, the patron saint of computer spell checkers, is responsible for the first written association of Valentine’s Day with romantic love in his Parelment of Foules (1382) (that’s "Parliament of Fools" for those of you who don’t read old English on a regular basis):

For this was sent on Seynt Valentyne’s day
Whan every foul cometh ther to choose his mate.

Pardon the spelling, but that’s the way they did it back in Chaucer's day.  This was before Microsoft Word and the spell checker.  Just read it aloud, and you’ll get it, more or less.  On the day the birds search for a mate, somewhere in the middle of February, (which seems a bit chilly for avian romance, but hey, I'm not a bird), a letter of love was sent from a lover to his beloved.  And that, kiddies, was more than enough romance for Hallmark to turn the feast of St. Valentine into a multi-million dollar romantic dynamo.

As you can probably tell, my wife and I don’t invest heavily in the stock of romance.  We never did.  We both come from a line of practical people who didn’t have the time, energy, or money to engage in fantasy.  We prefer the long, slow simmer of marital love, seasoned over 17 years of life together with laughter, play, passion, friendship, respect, honor, and fidelity.  Romance may get the ball rolling in the beginning but it doesn’t have nearly enough mileage to get a couple through the long haul much less out of a ditch.  Don’t think we aren’t passionate about each other.  We are.  But passion doesn’t require roses and a box of chocolates to prime the pump.

Historically, people got married for really good reasons - political power, land, money, and a herd of sheep.  Marriages were generally negotiated between fathers and the couple more or less played the marital hand that was dealt them.  I know people who are in arranged marriages, and they seem to fare much better in the marriage game than most of the folks I know who married for romance.  It was the Victorians, with their lace and lavender, that brought romance into marriage, causing otherwise sane people to expect to be swept off their feet by someone with whom they share a bathroom every morning.

Romance is a religion, holding out the prospects of perfection for a price.  It's a grand illusion that there is a special somone out there made just for you, a soul mate, your match made in heaven.  When you realize that the person you are married to isn’t that one, the absence of romance leads directly out of what might otherwise have been a perfectly serviceable marriage.  One of the things I hear all the time from couples in trouble is, “We need to rekindle the romance in our marriage.”  Hearing that, I know they are headed for disaster.  Romance is the last thing they need.  The pursuit of romance leads either to affairs or divorce court.  What the unhappy couple needs is a dose of maturity and the happy realization that life moves grandly on to better things after senior prom and the wedding day.  Enduring marital love consists in giving not getting, in faithfulness not fireworks.  The romantic mystery ends the morning he or she crawled out of your bed, which is precisely where all "romance novels" come to their end.

Walking by the local supermarket today, I noted the grim faced, determined young men dutifully clutching their bouquets of flowers, looking like St. Valentine on the way to his martyrdom.  I can only imagine what judgments await them at the close of the day.  As for me and my house, we’ll settle in to a nice home-cooked meal at our own banquet table and the easy ongoing conversation that is our marriage.  We’ll light a couple of candles, open a nice bottle of wine, probably a Cabernet, and raise a toast to St. Valentine, whichever of the three he may have been.  May they all rest in the peace of Jesus.

I hope it’s true that St. Valentine went to his death defending marriage.  We could use more of that kind of passion today.

Rev. Cwirla is Pastor of Holy Trinity in Hacienda Heights, CA and President of Higher Things. This article was originally posted on his blog.