A Death On A Friday Afternoon 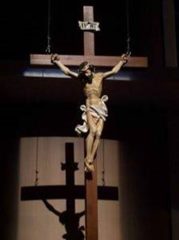 There he is!  He’s just hanging there. He refused to come down. Stayed to the bitter end. Breathed his last and said: “It is finished” (John 19:30). The veil in the temple split in two from top to bottom. The earth quaked. The rocks split. Dead people came out of their tombs (Matthew 27:51-52). Do you see him? Jesus of Nazareth! Who for us men and for our salvation came down from heaven Jesus of Nazareth! Yes, that’s right, he’s hanging there. His body hangs limp. Dead. Graveyard dead on a Friday afternoon we now call “Good!”

Good for you that is! “Really? Doesn’t look that way! Looks rather gris-ly and horrible.” Indeed. But dead on the cross Jesus is work that he does for you and for your salvation.

St. Paul puts it this way: “God made him [Jesus] who knew no sin to be sin so that we might become the righteousness of God,” (2 Corinthians 5:21). As he hangs on the cross the Father heaps all sin on his Son and says: “Now you be Peter the denier, Paul the persecutor, King David the adulterer and murderer, Adam and Eve who ate the forbidden fruit in Eden, the thief on the cross, and Kuhlman the worst of sinners. Be the one who has committed every sin of every sinner who has ever lived and ever will live. See to it that you make sat-isfaction and pay for all sin and for every sinner!”

And that’s precisely what Jesus does. He offers himself on the altar of the cross as the sacrifice that atones for all sin. Yours. Mine. The world’s. Despised and forsaken he is for you! He bears your griefs and carries your sorrows. Crushed he is into death and condemnation because he answers for all your sin. In his death on a Friday afternoon Jesus insists on carrying your sin in his body in order to answer for it. On the tree your sin is his. His righteousness is yours. He is damned with your sin. But his sacrificial blood renders you right-eous. What a sweet swap! What a blessed exchange!

In the latest Star Trek movie, Kirk’s father sacrifices himself for the entire fleet by steering his ship into the belly of the Romulan enemy Captain Nero. In the movie Gran Torino, Clint Eastwood’s character “Walt” dies in place of his friend Thao as an act of love and sacrifice. Walt’s death is the only solution to an impossible situation. His death provides freedom for Thao and Thao’s life is changed forever as he will live in the shad-ow of Walt’s death for him. Both James T. Kirk’s father and Clint Eastwood’s “Walt” only hint at the power of Christ’s death for you on the cross.

That Jesus does the salvation job as he dies there on the cross means that you cannot do it! You’re a lost a condemned person. You are a helpless self-centered sinner who deserves God’s temporal and eternal wrath and condemnation. Jesus is not. He is holy and perfect. On the cross he is crucified as the lawbreaker sinner in your place. He dies the death you deserve as a sinner. He receives the damnation you deserve as a sin-ner. And in his death he satisfies God’s judgment against you. Jesus has redeemed you: “in him we have re-demption through his blood, the forgiveness of our sins,” (Ephesians 1:7). He has purchased and won you from all sins.

What are your sins? What is it that you fear, love and trust above all things? Where do you look for all your good? Behold your idols! The false gods and saviors in your life! Some of the sin and sinning you know. There is a lot that you don’t know (that’s how bad it is with you). Some sin you hate and desperately want to stop. Other sin you love and want to keep on doing. Name the sin. Whatever the sin Jesus shed his blood on that Friday afternoon to cleanse you from it all (1 John 1:7). Yes, all sin! The whole enchilada of your sinning and sin! In thought, word, and deed! Even all the sin that has been committed against you! Imagine that!

So Jesus just goes and does it: a Good Friday just for you! While you were yet a sinner Jesus died for you! (Romans 5:8) Your sins then are forgiven. He left none out of his dying for you! Jesus refuses to hold them against you because he has covered them in his blood! So, blessed are you! Salvation is yours. The resurrection of the body and life everlasting are yours too. All because of his holy precious blood and his innocent suffering and death on a Friday afternoon that we call
good. Good for you! Everything has changed for you as you live in the shadow of His cross. “There is now no condemnation for those who are in Christ Jesus,” (Romans 8:1).

In the name of Jesus.