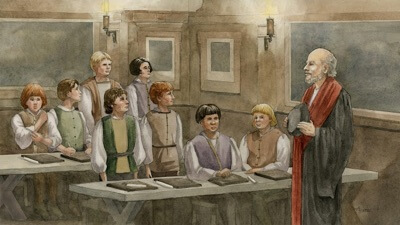 Geldennupf introduced Martin to ancient authors, like Aesop, Terence, and Virgil. The importance of this for Luther was so far reaching that later he translated Aesop's fables into German. And, he then urged students, friends, and family to read, learn, and memorize the wonderful, wisdom-teaching fables.

It was Trebonius and Geldennupf who recognized Luther's gifts, and it was they who paved the way for him to attend a university. Martin's father, Hans, was very encouraged by this turn of events and did whatever he could to secure his son's future learning, which he hoped would result in a career in church, law or medicine. Even though Hans barely earned enough to feed and support the family back home, when the time came, he made sure Martin had enough money to attend classes at the University of Erfurt.

It may be easy for us in the present to assume Martin's intellectual skills lent themselves to excelling at his studies, and religious life and piety, but they didn't. When he arrived at Erfurt, he was no different than any other student. And, as far as his religious life, Luther was an ordinary Roman Catholic—a believer who attended church regularly, but showed no particular excitement or desire to pursue religious studies.

Martin had learned a great deal about the Christian faith from the Schalbe's, who were devout people, and they taught him much about monasticism. But, again, this didn't appear to especially influence Martin's view of the church or religion. Singing in choirs, attending church, and the like was considered a good work, a part of Luther's Christian duty, and the way to gain spiritual security in his daily life. Salvation for Martin Luther, and everyone, was something earned. It was a religion of works.

Next week, we'll dig into what sin, confession, and penance at the end of the 15th century contributed to a Christian's "spiritual security" and daily life.