A Message from Pastor Hale 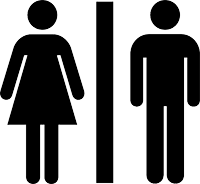 We are physical beings. There is no getting around that. Would our problems over male and female restrooms be solved if bathrooms were not needed at all? Would the controversy and heresy go away, if we could outlaw transgenderism and homosexuality? No, there is a more fundamental issue. It is an error that has been quite intense for at least 50 years, but was gaining momentum over 300 years ago. What is that? The world's god of equality. It started when Adam and Eve made themselves equal to God and brought sin into the world through disobedience. Equality, trying to make people look, act, and be the same, has replaced the scriptural Christ, who speaks a clear word on the differences between men and women and their unique purposes for this world.

The problem is that we, Christians and churches, have embraced the thinking that has led to gender-neutral bathrooms and individuals thinking that they can pick their gender like they can pick the color of shirt they wear. How many would disagree with this statement made to a child: “you can do anything you want to do”? Society and those influenced by the world have long said that all opportunities and public offices should be equally open to men and women. Girls have been taught to think they are no different than boys. So why should they have to use a different restroom? Isn't this hateful segregation—saying they are less human than boys? But God Himself declares that He is not for a bland, sexless equality: “As in all the churches of the saints, the women should keep silent in the churches. For they are not permitted to speak, but should be in submission, as the Law also says. If there is anything they desire to learn, let them ask their husbands at home. For it is shameful for a woman to speak in church” (1 Cor. 14:33-35). Our God speaks a clear Word on how we are to live in the bodies Christ died to redeem. Though it sounds harsh, this is not unloving. To live as God intended is good in itself and pleasing to Jesus our Lord.

Our biology does not seem to inform how we are to live on earth, in the same way it used to. The very idea of absolute authority and that someone (especially an invisible being) can tell us what to do, even if it doesn't make sense, is preposterous today. The answer cannot be only to condemn politicians, but to examine our own hearts, words, church practice, and families. In a word, the correct reaction is to repent. We have all overlooked to some extent the differences between male and female, and not seen them as good and holy. We have not taught our sons masculine virtues, like leadership, sacrifice, and honoring motherhood. Our daughters have not been educated in feminine virtues, such as submission, modesty, and the great privilege of birthing new life into the world.  These are obsolete, though the Bible is quite clear:

Likewise, wives, be subject to your own husbands, so that even if some do not obey the word, they may be won without a word by the conduct of their wives, when they see your respectful and pure conduct. Do not let your adorning be external—the braiding of hair and the putting on of gold jewelry, or the clothing you wear—but let your adorning be the hidden person of the heart with the imperishable beauty of a gentle and quiet spirit, which in God's sight is very precious. For this is how the holy women who hoped in God used to adorn themselves, by submitting to their own husbands, as Sarah obeyed Abraham, calling him lord (1 Pet. 3).

Without a clear distinction between male and female, it will be impossible to be either.  To deny the most obvious physical distinction between people is actually a religious value.  Worldly equality easily becomes an idol to which unbelievers bow down.  To deny how we are created is to deny our Lord who made us: Christ Jesus.

Behind the modern assertion of the right to choose one's life, behaviors, and identity, is rebellion against the true God.  And we have all bought the lie that we should get to determine our own life and what we do with our body.  President Obama recently said:  “I think that it is part of our obligation as a society to make sure that everybody is treated fairly, and our kids are all loved, and that they’re protected and that their dignity is affirmed.”  For the world, love is to simply accept every behavior and never tell someone “no,” even if they want to go to the bathroom with the opposite sex. Yet according to Christ, it is unloving and shameful to try to undo the divine distinctions of His creation.  In fact, our dignity is often our god—used to lift ourselves over others and over the Savior who died for poor, miserable sinners, without a holy dignity of their own.  What you are and think is the problem.  No one honors God appropriately and fulfills the role He designed for us.  This is obvious today in how much skin is shown by female clothing, even by very young girls.  “But God has so composed the body, giving greater honor to the part that lacked it” (1 Cor. 12:24).  Modesty is equated with honor—submission out of love for our Lord is pleasing to Him.  When Jesus redeemed us, He redeemed our bodies, so they are no longer ours to use in sinful and selfish ways.  We are called to holiness in our body.

God made man and woman different for marriage, and within marriage those differences are intrinsic to bearing and raising children.  The desire for worldly equality goes hand-in-hand with the denigration of motherhood and life itself, especially the weakest ones who cannot choose an outward identity for themselves.  A “marriage” between equals is an abomination.  It simply does not work as a one flesh union.  If men and women are to do the same things physically, God made a mistake.  To “be fruitful and multiply” is intimately related to the differences in the sexes and the biblical standard of sexual morality.

When male and female roles are confused or covered up, Christ is actually obscured and the family hurt: “But I want you to understand that the head of every man is Christ, the head of a wife is her husband, and the head of Christ is God” (1 Cor. 11:3).  Why?  Because God said—the very One who bled for you, to set you free from slavery to all sin. The one who believes in Christ will submit to the gender God assigned–even when it seems impossible. Your hope is in Christ's free verdict of salvation, not a man-made equality that is crammed down people's throats.

Not everyone must get married or will enjoy being the gender that God gave at birth, but having Christ as Lord is to acknowledge His authority over all areas of life—from the pastoral office instituted for males to proclaim the Gospel, to the family roles of husband and wife God made in paradise for Adam and Eve. Our hope is not to improve this world, but to be pure in the world to come. We must discipline and restrict our bodies, because they are bodies of death, directed by sinful passions. But in the struggle to be what God made us there is hope in Christ who forgives every sin. We are not equal outwardly to others, nor should we strive to be. We have something much better—a righteousness that comes by faith. Christ forgives and grants us His holiness, which we wear by trusting in our baptism and listening to His Word—not being something we are not or changing restroom signs. The world wants to prove it is right by force, while we are content to say: “we are wrong and shamefully sinful, but Christ's blood has made us right in heaven.”

God's authority is one. The authority to forgive is related to His authority to tell us how to live in the body and with one another in this broken world. It will not be easy to live as God states in Scripture, but find rest in Christ, not in breaking down social taboos. It is our Lord who broke the back of Satan and took away the power of sin, by fulfilling the Law we break in our bodies. Jesus died as an innocent lamb in His body. Here is our identity—not what we do in our own sinful body. But our bodies which Christ made are His, so what we do with them must not conflict with His holy will. The gift of Christ is not equality, merely being like other sinners. It is to be made equal in righteousness to our God, Christ Himself. In this we trust in this very unequal world.